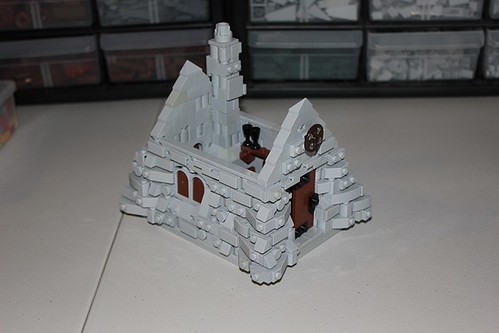 This tutorial shows how to build the walls I used in the Farmers Cottage for our Nordheim layout. It uses pretty straight forward SNOT tiles, plates, and slopes to get the rough stone effect.


I used a 2 plate thick platform to serve as the foundation of the building. 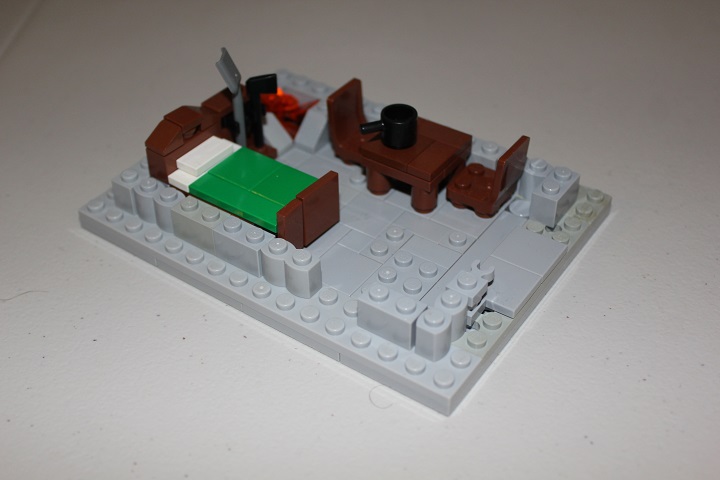 The walls start off 2 studs thick, then switch to 1 eventually, as the wall slopes in. Brick modified with stud and headlight bricks are set up to attach the first SNOT sections. 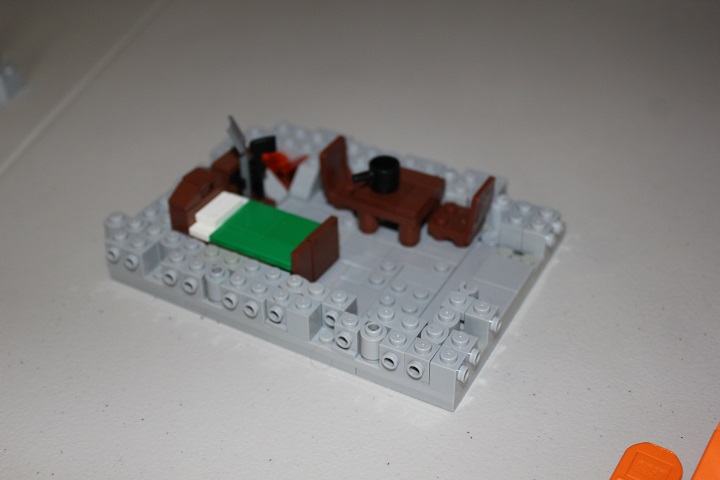 As you can see on the left end, in addition to the SNOT slopes, plates, and tiles, I sometimes used studs up log bricks extended out an extra stud to fit into the stonework. That helps the stonework keep from looking too uniform. 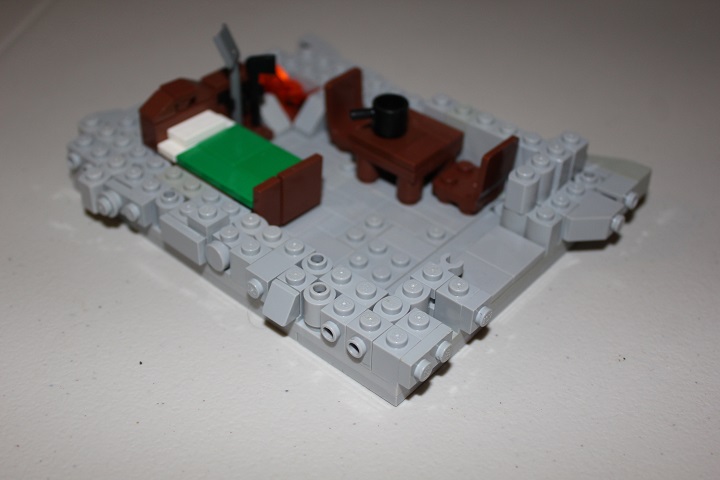 Starting to set up the next layer, the studs up slopes are in front of where the window will go. 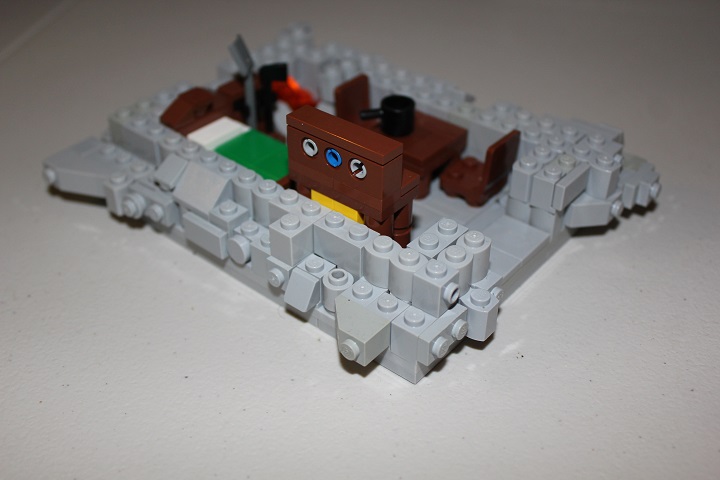 At the corners, I used slopes and plates to slope them out even more then the regular wall. Sometimes Id wrap a section around the corner, like with the 1x3 slope and brick w. stud shown here. 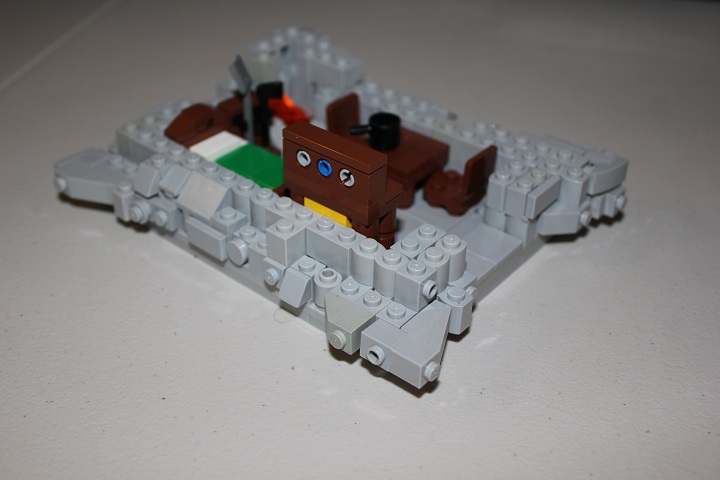 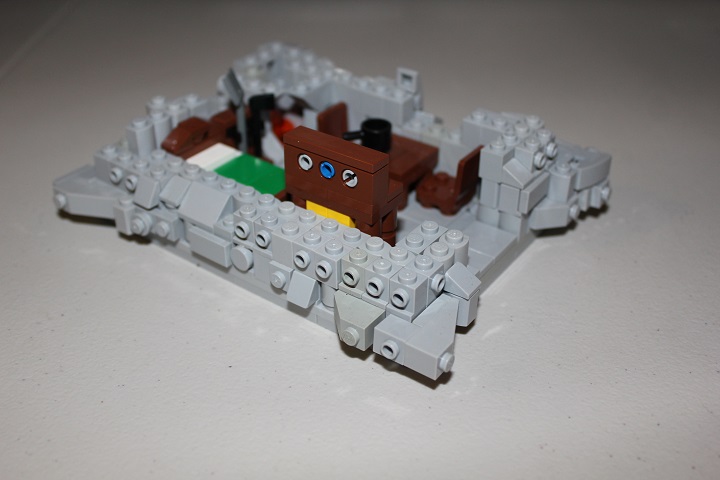 More SNOT additions: a mix of studs and tiles gives a nice rough stone look. Occasionally, jumper plates with centered plates or tiles give a nice texture as well, as demonstrated on the front corner. 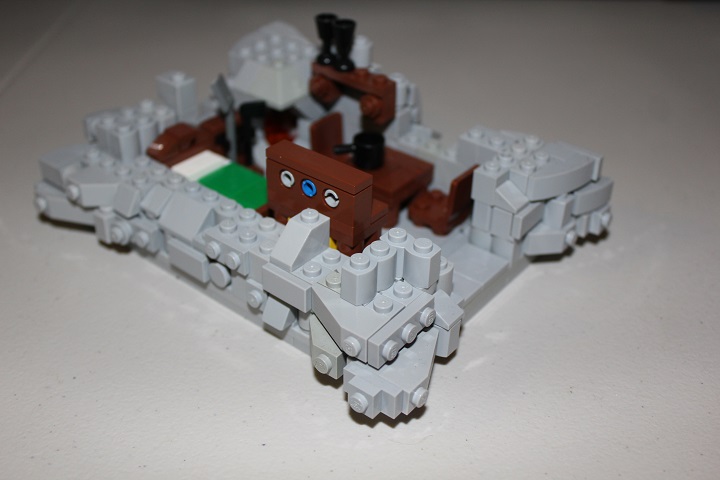 Onto the third brick level now, and the standard wall section gets moved back a stud to slope the wall. The corners stay 2 studs thick for a little longer. Given that I had an interior, I only used brick w. stud for the main walls after this, so that the backs of headlight bricks wouldn't show inside. If you don't include an interior, naturally you wouldn't have to worry about that.

A studs up slope or two helps emphasize the sloping wall transition. 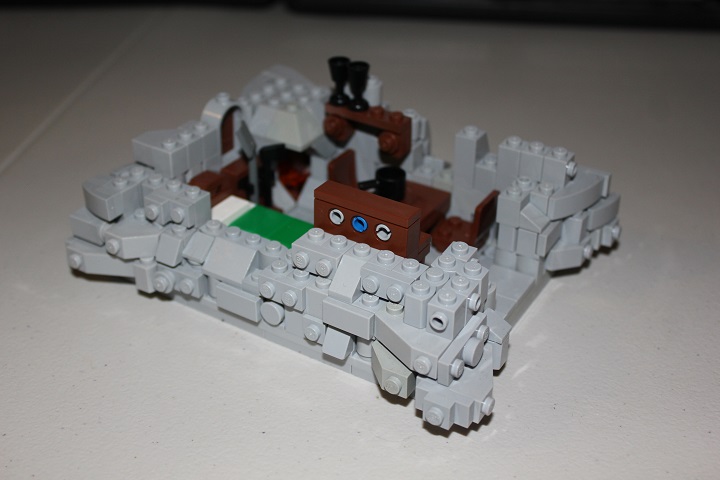 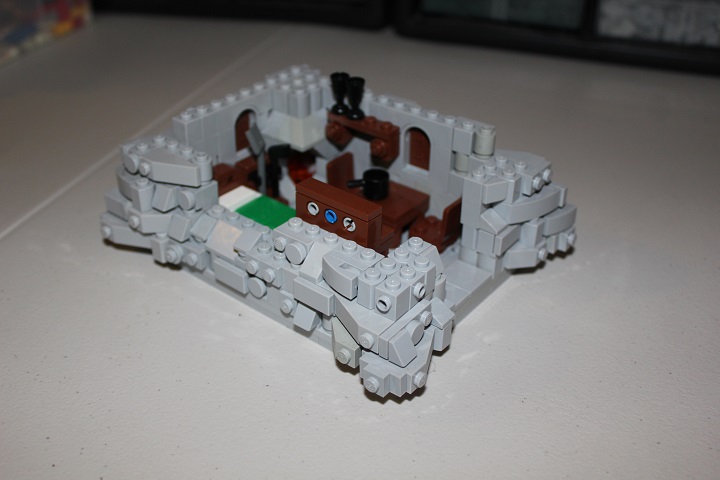 Windows added, and now even the corner section of wall is only 1 stud thick for the studs up sections. 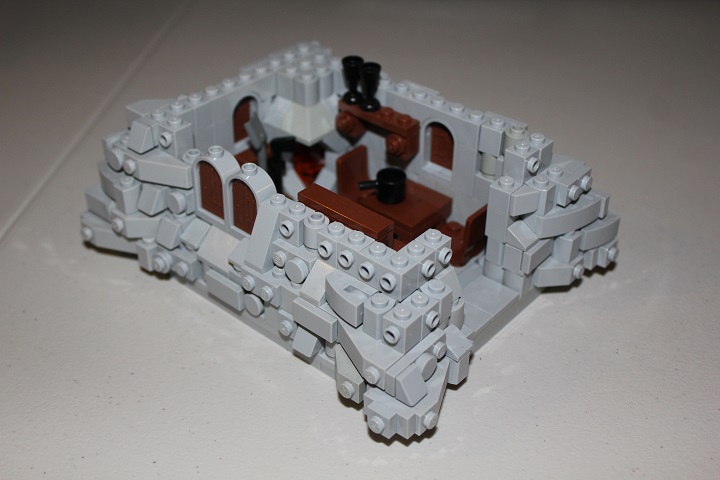 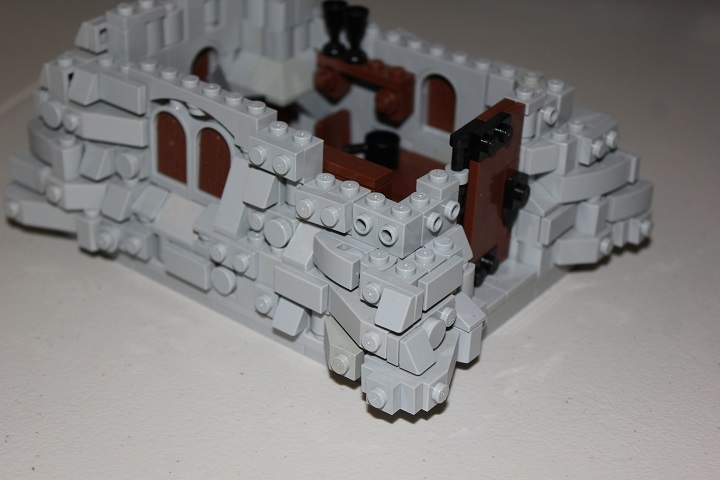 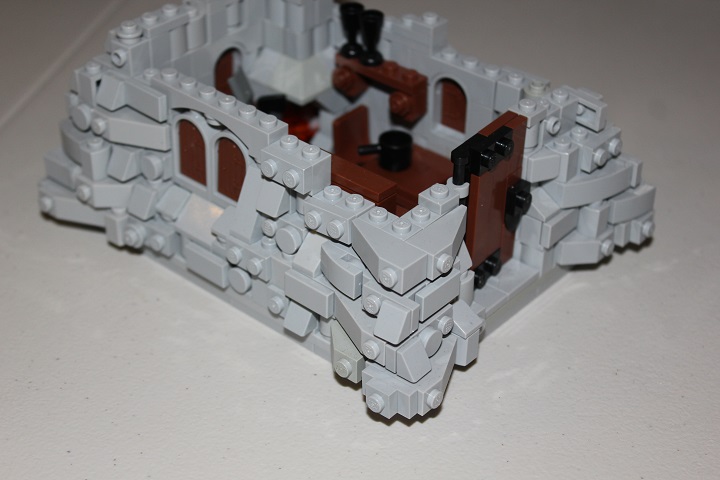 The window level was a plate higher than the surrounding brick layers, so I used a plate with rail to simulate SNOT tiles in a thinner section.

The side walls have reached their final height, so we just need to build the end walls to support the roof. 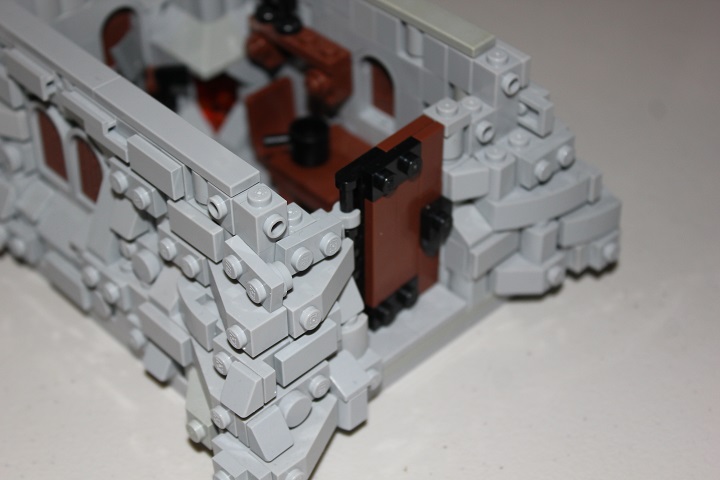 I did something similar to the window area, using plate with rail over the doorway. 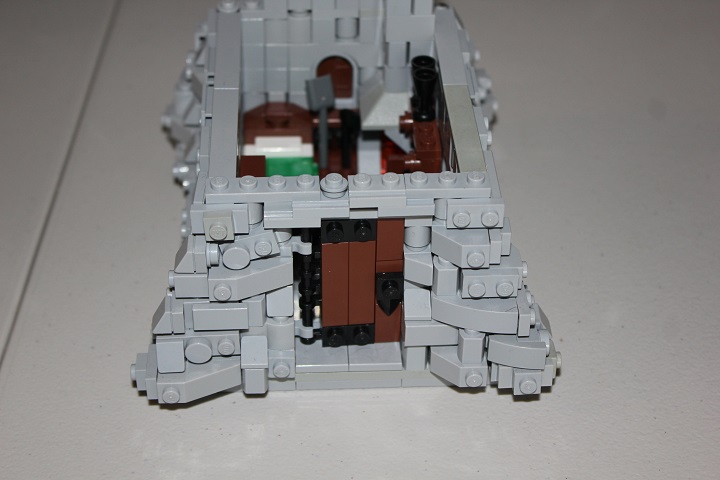 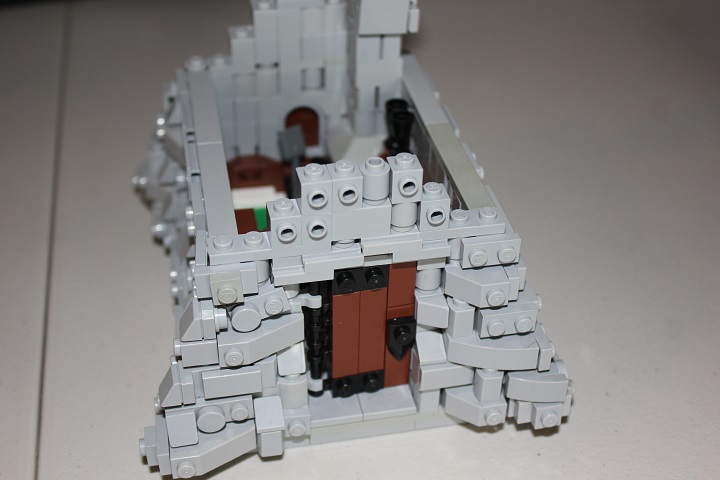 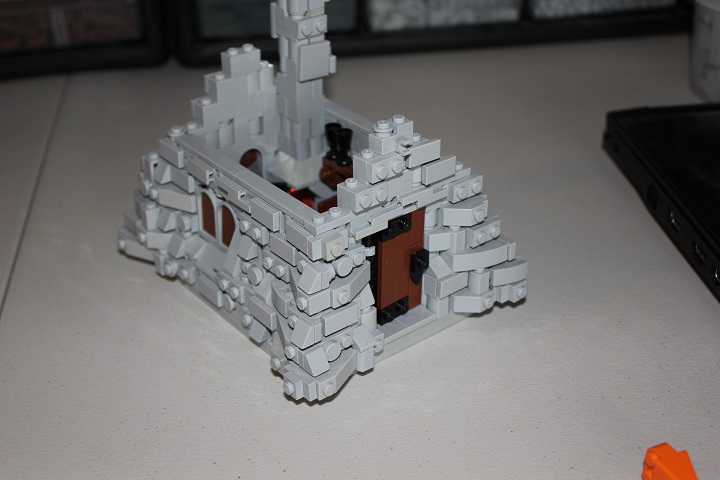 And there it is, all ready for the roof! 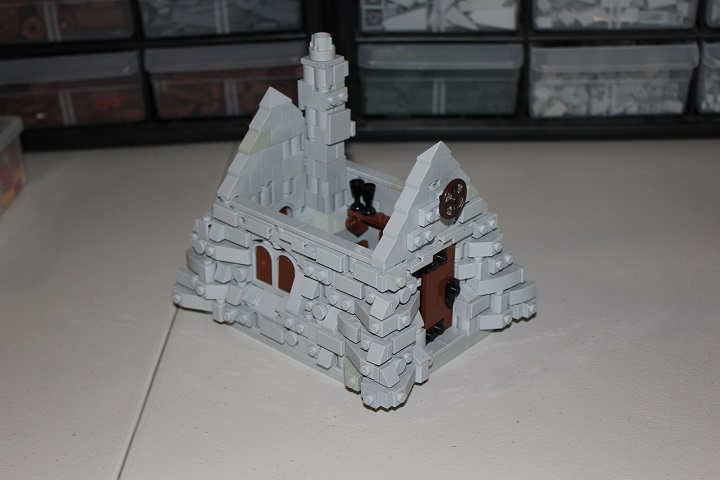 And here's how my finished cottage looked. 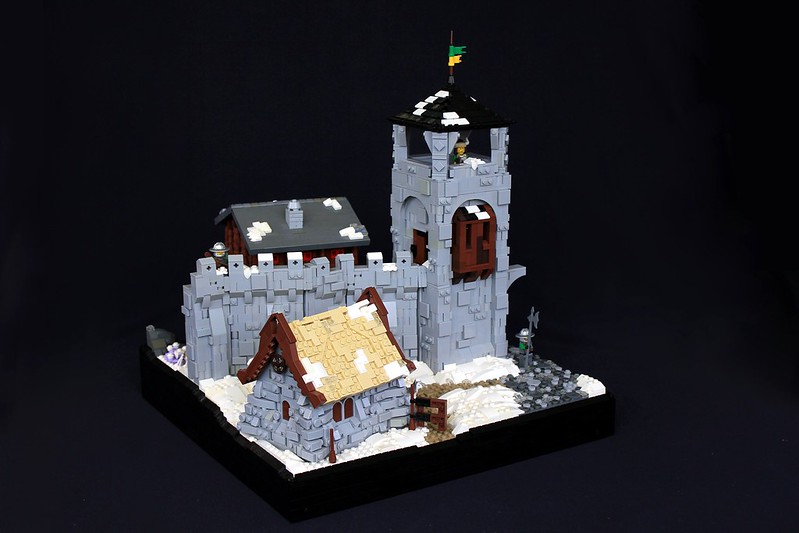 I hope this tutorial was helpful, and if you have any questions about the design, or suggestions for future tutorials, please comment below!